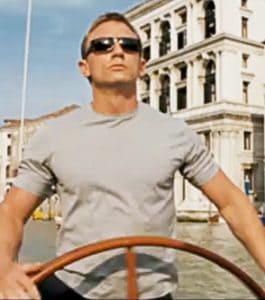 Venice is the perfect location where to film a movie and one of the movies that have been set in our city is Casinò Royale, the 21st movie in the official James Bond film series.
But the real question is: Where was Casino Royale filmed in Venice? In this article we are going to discover them all.
If we have to be honest, the only part of the movie that is set in Venice is the last one, but during these 30 minutes, James Bond passes through different places. Let’s see what they are.

St. Mark’s basin
James Bond arrives in Venice on a sailboat, at St. Mark’s Basin. During these scene you can easily recognize the island of San Giorgio Maggiore on the left and the Basilica di Santa Maria della Salute, right behind the Secret Service agent.

Accademia and Rialto Fish Market
Once the sailboat has entered Venice, it continues along the Grand Canal, from the Accademia to the Rialto Fish Market.
Rialto Fish Market is definitely a place that you have to see, especially in the morning when it is still alive and full of people selling and buying fish, vegetables and fruits.

St Mark’s Square
When James Bond and Vesper leave the hotel (unfortunately is not ours but the interiors are those of the Czech National Museum in Prague), Vesper tells 007 she will go to the bank, in reality she’s going to meet Mr Gettler.
Bond reaches Saint Mark’s Square and goes straight to the Basel Bank. We have to tell the truth though: there is no Basel Bank in Saint Mark’s Square.

Benedetto Marcello Conservatory of Music
The meeting between Vesper and Mr Gettler is not in Saint Mark’s Square, but in the court of a famous Venetian building: The Benedetto Marcello Conservatory of Music.
The conservatory of Venice has his home inside one of the most wonderful building in Venice: Pisani Palace.
In Casino Royal, this is palace collapses (don’t worry, it is still there), the thing is that this building is located in Campo Santo Stefano, which is not near Rialto Fish Market, as it is shown in the movie.

You know all the locations of Casino Royale in Venice now, you just have to go and see them with you eyes!