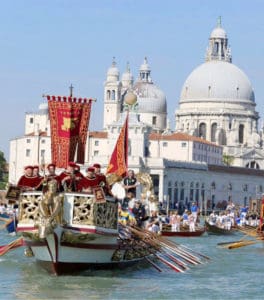 On paintings, Venice is always represented as a young, beautiful woman, and tradition wants her to be married with the sea. In fact, among the numerous festivals Venice has during the year, there’s a specific event recalling this marriage – the Festa della Sensa, also known as The Marriage of the Sea.

We mentioned the Festa della Sensa in our blog post about all the Venice events you can’t miss, but to find out more about this important celebration, we need to dig a little bit more into its history, starting with the meaning of its name.

What does Festa della Sensa mean?

In Venetian dialect, the word “Sensa” means Assumption. In fact, the festival takes place on the day of Jesus’s Assumption, which is always 40 days after Easter.

In the past, the celebration commemorated two important events for the Republic of Venice – the positive intervention of Doge Pietro II Orseolo against Slavs, who were threatening Dalmatian people, and the signing of the Treaty of Venice by Doge Sebastiano Ziani, Pope Alexander III, and the Holy Roman Emperor, and Frederick Barbarossa.

How does the marriage of the sea work?

The Marriage of the Sea ceremony is performed every year in the Venetian lagoon, even if the Serenissima Republic doesn’t exist anymore. It’s a ritual Venetians really love because the relationship between the city and sea is eternal – after all Venice is built on water, isn’t it?

But let’s see how this celebration works: the Doge in charge had to drop a consecrated ring into the sea, while pronouncing a phrase in Latin, which was “Desponsamus te, mare, in signum veri perpetuique domini” (“We wed thee, sea, as a sign of true and everlasting domination”[3]). In this way, Venice was officially consecrated to the sea, becoming one with it.

The programme of the Sensa Festival in Venice

The programme for the Sensa Festival takes place over two days – the 1st and the 2nd of June.
On June 1st, celebrations take place 5 pm at the Doge’s Palace, but only upon invitation. Inside the Sala dello Scrutinio, the twinning ceremony with the Adriatic Cities of Croatia will be celebrated, together with the award ceremony for the ‘Osella d’oro della Sensa 2019′. (The Osella is a precious coin given to institutions, private and public associations that have increased the prestige of Venice).

On the next day, June 2nd, at 9am, boats will start gathering in St. Mark’s Basin to proceed towards S. Nicolò di Lido at 9.30. At 10.30 am there’ll be the Marriage of the Sea ceremony and at 11 am a performance by the Coro Serenissima will take place in front of the Church of San Nicolò at the Lido.

To conclude the day, a Holy Mass will be celebrated at the Church of San Nicolò at 11.30 am.
There’s one last thing we would like to share with you, a traditional Venetian expression related to this festival. In fact, there’s a saying that Venetians still use, “andar a la sensa”. This can be literally translated with “go to la Sensa” but it actually means “going slow”, because of the long queues Venetians had to do to reach St. Mark’s on the Assumption Day. Cool saying, isn’t it?