Home > Exhibition > The Redentore Festival in Venice: all you need to know 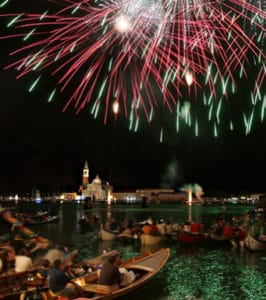 If you happen to be in Venice on the third Sunday of July, you’ll be lucky to attend one of the most important celebrations in the city: The Redentore Festival.

We have already talked about this event in a previous article, revealing the best places where watch the Redentore fireworks, and if you have read it you already know a bit of its history. But, this time we are going to dig deeper into the facts, discovering why this celebration is still so important for Venetians like the Madonna della Salute Festival, which is based on a similar event.

Where does the Redentore Festival come from?

To answer this question, we need to travel back to the second half of the sixteenth century, to the year 1575, when Venice was hit by a terrible plague.
Alvise Mocenigo was the Doge at the time, and we have to say that his time in office wasn’t so lucky, if we may say so. In fact, just a years before the plague, a fire destroyed part of the Doge’s Palace, and an extraordinary high tide flooded Venice. Not really a good time for Venetians and for the poor Doge Mocenigo, who had to deal with the unhappy population.
But no one can stop the plague, not even Alvise Mocenigo, who helped the Pope defeat the Turkish fleet at Lepanto, in 1573. The plague showed no mercy, causing about 50.000 deaths and putting Venice on its knees, begging for the Lord’s salvation.
And so it was. The Doge, together with his Council, decided that if the plague left the city, a church would be built. And this is what happened. The Redentore church was built in 1576, a year after the epidemic was defeated.

From that year on, Venetians remember this event with a pilgrimage to the church through a bridge made of boats which is built for the occasion, and an amazing fireworks display above St. Mark’s basin.

The programme for the Redentore Feast Day

If the Festival of the Most Holy Redeemer is on Sunday, the pilgrimage starts the day before, together with the fireworks display.
The appointments to attend on Sunday are three:

To finish the day, at 7 pm a Mass is celebrated inside the Redentore Church.

We are sure you already heard something about the Redentore Festival in Venice and its fabulous fireworks, but now you also know about its history, after reading this article.

We hope we gave you some information you didn’t know about this incredible day in Venice, the only day during the year when St. Mark’s basin is full of Venetian boats, decorated for the occasion and full of people who want to have a good time and celebrate this long-running festival.