Home > Exhibition > Carnival of Venice: the history of a centennial festival 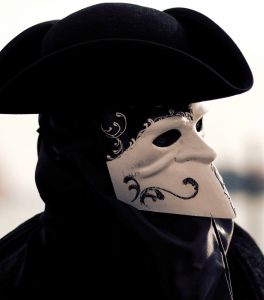 The history of the Venice Carnival dates back to 1024, when this festival was mentioned on a document of Doge Vitale Falier, for the first time.  However, the Carnival of Venice was recognized as an official holiday by the Senate only in 1296.
This centennial festival was quite different from the one we are used to live nowadays. First of all the Carnival used to last months, from the 26th of December until Ash Wednesday, even if wearing masks were allowed since October.
Originally the Carnival of Venice masks were used to level out the differences between the classes, since they can guarantee the anonymity of people.

Types of Venetian masks
Venetians used to wear just two kinds of carnival masks: the Bauta mask and the Moretta mask.
The Bauta mask is not only a mask, but a complete costume, composed by the traditional white mask and a black cloak, called “tabarro”. Wearing this mask gave the possibility to all Venetians to be the person they wanted to be, no matter what class they belonged to.
That is to say that rich people could act as poor and vice versa.
The Moretta mask, instead, is a typical feminine mask. Wearing this mask, women couldn’t speak, since they had to held it by gripping their teeth on a button inside the mask. In this way, women could decide when and whom to speak. As you can imagine, this masks allowed women to create an air of mystery around themselves.

How Venetians used to celebrate Carnival
During the Carnival period, Venice was full of events. Jugglers, acrobats and dancers entertained people with their performances in Saint Mark’s Square and in private parties.
Theatrical performances started to be played in cafes, private homes and theaters, becoming the perfect excuse to turn the party into a transgressive one.
Unfortunately, the anonymity gave spiteful people the opportunity of committing crimes, such as thefts and rapes. This is the reason why wearing a mask after sunset was banned in 1339.

The end of the Venetian Carnival and its rebirth
The last Carnival in Venice is dated at 1797, the year when the Venetian Republic fell. With the Napoleonic domination, many of the Venetian traditions and feasts were abolished, including the Carnival.
After almost two centuries, in 1967, the Carnival of Venice was officially restored.

Nowadays Venice Carnival is one of the most famous festival in the whole world, full of activities and parties all around the city.
You can still live the traditional atmosphere of the Venice Carnival by wearing a typical period costume and participating to a masked ball, hosted in a marvelous Venetian palace.