Home > Exhibition > Curiosities about Venice: 5 things you might not know 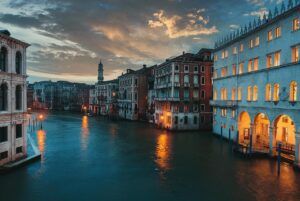 There are so many curiosities about Venice and perhaps we will never really know them all. In this article, we have collected 5 curiosities that you might not know about our beautiful city and that we usually share only with our guests. This time we wanted to make an exception and share some of them with you who are planning your trip to Venice.

Why Venice was called ‘Serenissima

Many stories tell the reason for this name, but one of the most reliable attributes is the origin of this appellation to the goddess Reitia, worshipped by the Venetians before they left their homes on the mainland to take refuge among the Venetian islands to escape the arrival of the Huns. Reitia was also called ‘la serenissima’ or ‘la splendida’.

On the terrace of St Mark’s Basilica, stands proudly a Quadriga of Horses from the Hippodrome of Constantinople. The story goes that after the victory by the Christians between 1202 and 1204, Doge Enrico Dandolo wanted to bring them to Venice as spoils of war. Only after 50 years were they placed where we see them today.
To tell the truth, to protect them from the weather, the original horses are located inside the basilica’s exhibition route, while those on display are perfect copies.

Clocks in Venice have 24 hours

Observing the clock tower, the façade of the church of San Giacometo a Rialto or the clock inside the Fondaco dei Tedeschi, you will realise that the dial is not divided into 12 hours, but into 24! The reason is simple, at the end of the 14th century the sundials were replaced by the first clocks, which initially kept the same conformation. In time, it was realised that it became difficult to count each chime, so the dial was modified as we know it today.

The two pink columns of the Doge’s Palace

When you stand in front of the majestic façade of the Doge’s Palace, stop for a moment and look at the columns of the loggia: two of them are pink!
It seems that between these two columns the Doge used to read the death sentences in the Piazzetta.
It is also said that this was the place from which the doge watched executions and from which, on some occasions, some were also carried out, such as the hanging of a certain Francesco Baldovino in 1412, accused of betraying Venice.

The Rialto bridge disappeared for 70 years

The last, but no less important curiosity concerns the famous Rialto Bridge. At one time, the bridge was not as we know it, but was built of wood and was a drawbridge, to allow boats to pass. In 1444, however, it collapsed under the weight of the crowd that had gathered to watch the passing of the wedding procession of the Marquis of Ferrara. After its collapse, the government of the Serenissima took about 70 years to start rebuilding it, there were so many projects to choose from.

Interesting, isn’t it? If you would like to know more interesting facts about Venice, stop by the reception and we will be happy to share other interesting and special anecdotes with you about our city!