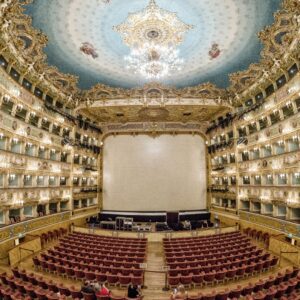 Among the things to do in Venice in the evening, we recommend to treat yourself an evening at the La Fenice Theatre. To experience the thrill of attending a performance in one of the world’s oldest and most beautiful theatres is priceless, especially if once you have left, the show continues through the calle of a timeless city: our Venice.

Not sure how to dress for an evening at the Teatro la Fenice? In our article on the Dress-Code required, you wull ind all the information needed.

The La Fenice Theatre was inaugurated on 16 May 1792, the day of the Festa della Sensa. It was built according to the design of Gian Antonio Selva. In 1836 was in danger of disappearing forever due to a violent fire. Its name was not chosen by chance in fact, from the  ashes it rose again, more splendid than before.

During the Napoleonic domination, the theatre officially became the State Theatre. La loggia was built to celebrate the Emperor’s visit and the auditorium was decorated in French colours.

In 1996, the theatre was damaged by an arson attack it was decided to rebuild it ‘as it was and where it was’ the same as Campanile di San Marco after its collapse.

The La Fenice Theatre has several curiosities to tell, here we have chosen to report the most unexpected ones.

We at the Hotel Arcadia love to treat ourselves to an evening at the La Fenice Theatre, at least once a year. Crossing its threshold is always a strong emotion that sparks amazement and wonder, because this theatre is a magical place, exuding history and music from every drape and every box.

If we have intrigued you, don’t hesitate to ask us for more information about tickets or dress code, or perhaps some other curiosity related to the history of this unique theatre. We are waiting for you at the reception!