Home > Exhibition > Bridge of sighs in Venice: the true story 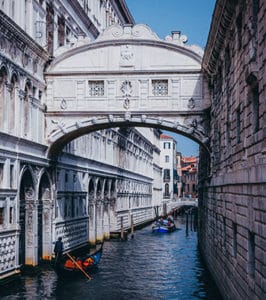 The Bridge of Sighs is one of the most famous bridges in Venice, connecting the Doge’s Palace to the Prison building, near St. Mark’s Square.

This bridge is not like the others you’ll see in Venice. In fact, it can’t be crossed, unless you attend the regular visit to the Doge’s Palace or the Secret Itinerary Tour.

Nowaday the Bridge of Sighs is probably the most photographed bridge in the world, but people often don’t know its history, and why it has this name. This is what we are going to reveal today.

What is the history behind the Bridge of Sighs and its name?

Before 1589, prisoners were kept inside the Doge’s Palace, but then the Senate felt the need to build a separate building to host them. Consequently, it was necessary to build a bridge to link the two buildings, and the job was assigned to the architect Antonio Contin.

The main reason why the Bridge of Sighs was requested by the Doge in charge, Marino Grimani, was to prevent the escape of prisoners. In fact, the bridge is closed on both sides.

Prisoners used to cross it to reach the interrogation room, located in the Doge’s Palace, where they would find out what their sentence was. This is why the name of the bridge is commonly associated with the image of a prisoner who, walking through it, turns his gaze to the lagoon for the last time, sighing.

It’s a strong image, but it’s probably not far from the truth.

Now that you know the history behind the Bridge of Sighs, you will certainly understand why its name can’t refer to the promise of eternal love as some people say.

What can you see from the Bridge of Sighs in Venice

Antonio Contin built the Bridge of Sighs in Istrian stone, and being a closed bridge, it was projected with two small windows drilled into the marble, on both sides.

What can you see from them? The majestic San Giorgio Maggiore island, where the church of the same name is located, surrounded by the lagoon.

It’s an image you’ll remember forever once you see it, especially if you think that it’s exactly what prisoners used to see while they were going back to their cells, after having become aware of their destiny.

Lord Byron and the Bridge of Sighs

As you may know, Lord Byron spent some time in Venice during his life, and he wrote a poem about the city he fell in love with. In fact, the poem is entitled “Venice” and it begins with these words:

“I stood in Venice, on the Bridge of Sighs;

A palace and a prison on each hand;

I saw from out the wave her structures rise

As from the stroke of the enchanter’s wand […]”

It was because of this poem that the world knew about the Bridge of Sighs and this name.

Like Lord Byron, you can admire Venice from the Bridge of Sighs in the same exact viewpoint.

Take a picture form there and take it with you, it will be one of the best memories of your vacation in Venice.