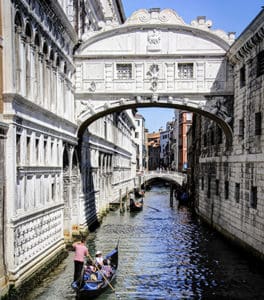 We won’t be wrong if we say that Venice is the city of bridges. Do you know how many bridges there are in Venice? They are almost 400, 391 to be precise. Venice is built on water and people used to move around it by boat – in fact, there were no bridges connecting islands to one another in the past. The very first bridge that was built in Venice was the well-known Ponte di Rialto, which originally didn’t have its current shape.

This is not just another blog post, but a real guide through the most famous bridges in Venice, that you can print out and take with you during your holiday here.

As we said, the Rialto bridge was the first one to be built in Venice, mainly because it’s located in the heart of the city where the economy started growing.

It was rebuilt several times. Initially, it was a wooden bridge, with two inclined ramps, to allow the passage of ships crossing the Grand Canal and reach the Rialto Fish Market and the Erbaria to sell their goods.

The bridge everyone photographs today was built in 1591 after it collapsed in 1524.

The main characteristic of this beautiful stone bridge is that it was planned to host many shops, which are still located under the two porticos on both inclined ramps that meet in the middle of the bridge.

Today, this bridge is one of the uncontested icons of Venice – you must see it.

Not many people know about this bridge, but it played an important role in the history of Venice. In fact, it is called “the bridge of fists” because it was where Castellani and Nicolotti – two groups of Venice inhabitants – used to punch each other to defend their reasons.

In the past, bridges had no parapet, so the goal of this ‘punching game’ was to push as many opponents as possible into the canal.

The most famous bridge of fists in Venice is located in >Dorsoduro district, but a few people know that there’s another one in Cannaregio district, close to Santa Fosca.

You have certainly seen at least a picture of this bridge while surfing the web, maybe searching for a self-guided walking tour in Venice or what’s <the best itinerary to attend at the Doge’s Palace. This bridge is so different from all the others around the city, in fact, it’s not a public bridge but it connects the Doge’s Palace to the building of the New Prisons.

Many legends have been told about this bridge, but the truth is that it was just the way for prisoners to reach the interrogation rooms, to find out their sentence. During the visit to the Doge’s Palace, you’ll have the chance to cross it and see the island of St. Giorgio Maggiore from its tiny windows, just like prisoners used to see it before their – probable – death.

The Accademia bridge is one of the fourth bridges – including the Rialto Bridge and the Scalzi bridge we are about to talk about – crossing the Grand Canal. Nowadays it’s the longest wooden bridge in Venice, and it connects the Gallerie dell’Accademia to Campo Santo Stefano.

History has it that the construction of this bridge was suggested in 1488, but nothing was done until 1854, because the members of the Council didn’t think it could be useful.

Last but not least, there’s no doubt this bridge is actually one of the best places to watch the sunset in Venice, and we are sure you don’t want to miss the chance to see one if you’re traveling as a couple.

Read also: Venice for couples, 3 special things to do

This last famous bridge in Venice we would like to present in this article is the so-called Ponte degli Scalzi. The original bridge was built in 1858 by Alfred Neville, when Venice was under Habsburg domination, but then it was replaced by the one we can cross today, projected by Eugenio Miozzi. Its name, which literally means “bridge of barefoot”, is due to its proximity to the church of San Nazareth, where Carmelites celebrated Mass for 300 years.