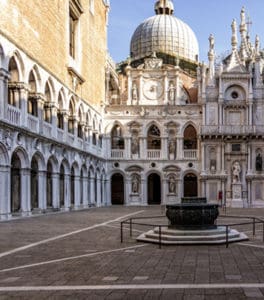 The Doge’s Palace is one of the must-see attractions in Venice. This palace used to be the home of the Doge in charge, and the headquarters of the Venetian government.

Originally, it was built as a medieval castle, with the usual four towers and high walls, but as the years passed by the architecture of the palace changed, not only because of a fire which destroyed the most of it, but also because of the political structure Venice adopted with Doge Ziani, a revolutionary and visionary man, who guided the Serenissima Republic between 1172 and 1178.

Nowadays, the Doge’s Palace is an incredible example of the precious Venetian Gothic style, and a treasure chest full of history and hidden rooms.
There are two ways to visit the Doge’s Palace – the classic one and the ‘secret’ one, which can both be purchased with the Venice city pass.
The regular tour takes you through the most important rooms in the palace, such as the Grand Council chamber, one of the widest rooms in whole of Europe, which used to house the first phase of the Doge’s election. You can also visit the Doge’s apartments and the Prison building, connected to the palace by the world-famous Bridge of Sighs.

The secret itinerary, instead, focuses on the administration offices and many other rooms you won’t see by attending the regular tour, including the old prisons, and the torture rooms.

The secret itinerary tour of the Doge’s Palace in Venice

The itinerary begins in the courtyard where, through a narrow door, you’ll step into a world that tells stories of detention and death – the so-called Pozzi (Wells).
They have this name because of their underground position, beneath the Doge’s Palace. They were built in stone and covered with wood, to make them appear like real coffins.
These cells were reserved for those who committed the worst crimes, that’s also why the conditions of detention were so terrible, and the writings on the walls are so desperate and talk about freedom.
The itinerary continues upstairs, through a small stair which takes you to the Ducal Notary room, and the chamber of the Deputato alla Segreta of the Council of Ten. These two rooms are small and hidden, you can’t even tell they exist when you look at the Doge’s Palace from the outside.
Continuing with the tour, you’ll enter the Office of the Great Chancellor, the only public figure elected by the Great Council, and then the Chamber of the Secret Chancellery where many public and secret documents are still stored.
Passing through the office of the Chancellor Regent, you’ll head to the room of torture, where the hard rope punishment was performed.
At the beginning of our virtual tour we visited the prisons underneath the Doge’s Palace, now it’s time to see those above, the so-called Piombi (leads) because of their location, right under the lead roof of the building, where Giacomo Casanova was imprisoned.

Conditions here were much better than those in the Pozzi. In fact, these cells were used only for prisoners accused of political crimes, and those who were waiting for a sentence.
You are also going to see the attic, where many weapons are preserved, as well as the Chamber of Inquisitor and the Chamber of the Three Head Magistrates, with a secret passage connecting it to the Chamber of the Council of Ten.

At the end of the tour, you can also visit the rest of the Doge’s Palace by yourself, discovering all its most fascinating and important rooms.
We warmly recommend this tour, because it’s a new and unique way to know about Venice and its political organization.
If you’re taking this tour in the morning, let us give you another tip for the afternoon: a self-guided walking tour in the Dorsoduro district to discover the ancient art of gondola making.