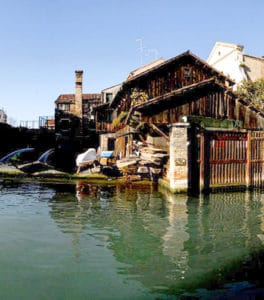 There are many different walking tours of Venice available online, but just a few of them are dedicated to the Dorsoduro district.
We have already written an article about a self-guided walking tour in Venice, around Cannaregio district which is where our hotel is located, that you can easily print out and take with you on vacation. This time, we would like to focus on Dorsoduro, which is mainly known for being the university district of Venice.
Thanks to this virtual tour you’ll see how many curious things you can find and see in Dorsoduro, in addition to the beautiful Ca’ Foscari palazzo, the headquarters of the Venetian University, not far from the famous Frari Church, the starting point of our walking tour.

The Frari Church is certainly one of the top 5 churches to visit in Venice, not only because it’s an excellent example of Gothic style, but because of what it houses inside.
In fact, one of the best-known attractions is the unique monument dedicated to Canova, a marble pyramid based on the design the sculptor made for Tiziano’s tomb.
Talking about Tiziano, the painter, you can’t miss the Assumption of the Virgin, one of his most beautiful paintings, which is inside the Frari Church too.

Leaving the Frari Church behind you, follow the indications on Google Maps until you reach Campo Santa Margherita. This campo is one of the biggest in Venice and it’s where Venetians usually stop by for aperitivo .
Crossing the well-known Ponte dei Pugni (Bridge of Fists) you’ll get into Campo San Barnaba, where a scene of the Indiana Jones and the last Crusade was shot (one of the movies filmed in Venice you should see).

Close to Campo San Barnaba, there’s one of the most beautiful palaces facing the Grand Canal, which is also one of the most interesting museums in Venice – Ca’ Rezzonico.
This public museum is dedicated to the 18th-century in Venice, and it is certainly worth visiting, not just for the paintings and the amazing furniture of its rooms, but also for its hidden garden and the spectacular view you have over the Grand Canal from its entrance facing the canal.
Let’s go back to Campo San Barnaba and take the sotoportego (covered walkway) on the other side of the square to reach our next stop, a place you can’t see anywhere else in the world!

The Venetian word “squero” refers to the place where gondolas are built. Unfortunately, there aren’t many places like this anymore – however, in this district you can find the oldest ones in Venice, San Trovaso and Tramontin.
The former is the oldest, since it’s even mentioned by Goldoni in one of its writings, and the latter has been open since 1884.
Actually, there’s another squero on Giudecca Island, run by Gianfranco Vianello called Crea, who won the Historical Regatta many times.
Visiting these place will be like going back in time when everyone in Venice had at least a gondola, just like we have at least a car in our garage.
Building a gondola is an art that you can’t explain, you need to see it with your own eyes to understand the complexity of its shape. But in the meantime, you can find out all the secrets behind a gondola, on our blog.

Followingh our walking tour in Venice Dorsoduro, in only four minutes you can reach the Accademia Gallery, standing in front of the Accademia Bridge, where a countless number of Venetian paintings are exhibited.
If you decide to visit it, consider spending at least a couple of hours there since it’s really something that deserves to be seen with no rush to be entirely appreciated.
Not far from the Accademia Gallery there’s another famous museum you might want to see, the Peggy Guggenheim Collection.
If you’re planning to come to Venice in summer, you’ll have the chance to participate to the traditional aperitivo that the museum organizes every year.
The event is called HappySpritz@Guggenheim, it will be an occasion to taste the traditional Venetian aperitif surrounded by art.