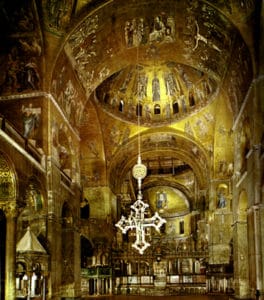 Most of the basilica’s treasures came from the Crusades

As you probably know, Venice wasn’t a belligerent city, it was more focused on business and trade. Anyway, when it had the chance to benefit from a war or a Crusade, it usually didn’t back down. For example, the fourth Crusade was crucial for Venetians, since they were asked by Pope Innocent III to build the navy that would have brought the crusaders to Egypt.

Unfortunately, when all the ships were ready, the crusaders didn’t have the money to pay for them, so Venetians, who knew that this would have affected their trade and finance, decided to participate in the Crusade anyway to compensate the loss with part of the plundered goods.

As you can imagine, many of these treasures were then placed in St. Mark’s Basilica, and some of them are still there.

The Horses of St. Mark’s Basilica

Speaking of treasures, one of the things Venetians took home from Constantinople during the fourth Crusade was the Triumphal Quadriga – now known as the Horses of St. Mark – which were located in the Hippodrome of Constantinople. Those you see today on the Basilica facade are a copy, the original ones are inside the church.

The Virgin Mary with a gun

It might sound weird, but inside St. Mark’s Basilica, there’s actually a relief of the Virgin Mary with a gun on one side. If the relief dates to the 13th century, the gun was put there in 1849 by Venetian sailors who survived the explosion of an Austrian bomb in Marghera (a city near Mestre).

The altarpiece is the famous Pala d’Oro, a gold panel covered with precious gems. Needless to say, it’s an incredible work of art, but the thing that many people don’t know is that when Napoleon Bonaparte occupied Venice and took many of its treasures away, Venetians managed to keep the Pala d’Oro with an innocent lie.

Actually, it wasn’t a lie, but a misunderstanding. In Venetian dialect the word “glass” (Vetro in Italian) is the same as the word “authentic” (Vero in italian), so when Venetians told Napoleon that the golden panel was authentic (vero) it sounded like “the golden panel is made of glass” so he assumed that all the colored gems inside the panel were just pieces of colored glass, and he left it there. Whether this is true, or just a nice story to justify the fact that Napoleon didn’t take the Pala d’Oro to France, we’ll never know, but the fact is that it’s still in place.

Want to know more about Venice and its curiosities? We suggest reading our article about Venice’s hidden gardens or the one about the history of the first Casino in Europe, in our blog.

Moreover, if you like mystery, there’s a secret tour inside the Doge’s Palace we really recommend. You’re going to love it!